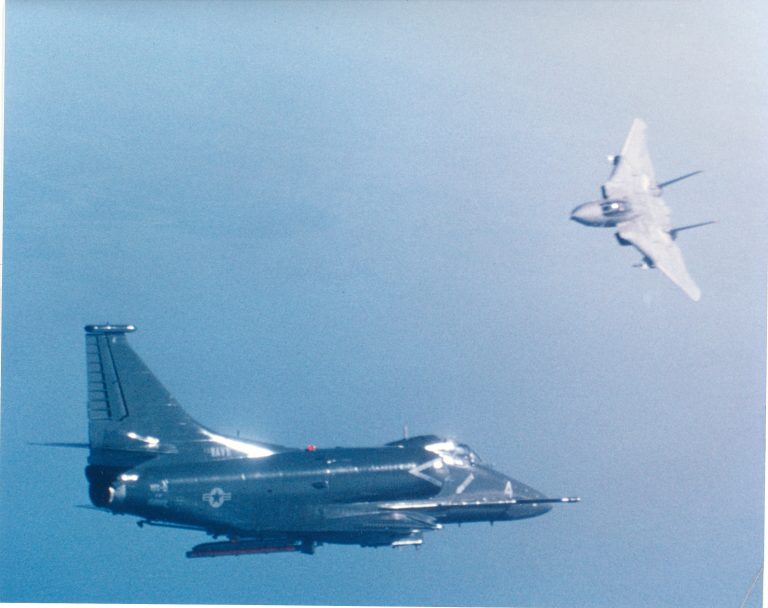 Long before I met Hawk, I’d heard of him.  He was a legend in the fighter community.  My first knowledge of Hawk came in October 1976.  I had reported to VA-27 aboard USS Enterprise several months after Hawk had departed for orders to Naval Fighter Weapons School—TOPGUN.  As a squadron LSO, I spent quite a bit of time on the LSO platform.  There I was treated to a steady stream of Hawk’isms, quotes, anecdotes, non-standard LSO terminology, and countless sea stories.  Clearly, Hawk had made an indelible impression on the LSOs and, as I came to discover, on the entire airwing. When Hawk’s name was uttered, it was done with warm smiles and in reverent tones.  I became quite curious about this man.

As my three-year tour with VA-27 was about to wind up, I was introduced to a squadron at NAS Lemoore which provided dissimilar air combat training and adversary support.  After three years and nearly 800 hours flying the A-7E Corsair, an eleven-ton dump truck, in the air-to-mud mission, I was ready for a change of mission and platform.  In September 1979, I received orders to VA-127, the Pacific Fleet Adversaries.

All Adversary Pilots were required to complete the TOPGUN Adversary course prior to certification as Adversary Instructors.  I reported to TOPGUN in February 1980 and discovered that Hawk had been the Commanding Officer of TOPGUN until March 1978.   Again, I’d missed him, but evidence of his presence was everywhere—in the tales of his airmanship, in the changes he had driven in modernizing fighter doctrine, in the expansion of tactics training to fleet units, and also in the professionalism and obvious pride of the TOPGUN instructors.  My curiosity grew.

I spent three years in VFA-127 and, much to my happy surprise, was rewarded with yet another adversary squadron assignment, this time to VFC-13 at NAS Miramar, Fighter Town USA, in San Diego, California.  I reported in June of 1982 as the Squadron Safety Officer.  Miramar had been Hawk’s stomping ground and, although he was assigned to the USS Ranger (CV-61) at the time, according to the scuttlebutt, Hawk was coming back home.

My big moment to actually meet the man came in August of 1983 when he returned to Fighter Town as the Fighter Wing Operations Officer.  After six years of hearing about Hawk and seeing the results of his work, I was eager to meet him.

Although Hawk held a prominent position at Fighter Wing and his time was in high demand, he always made himself available for his shipmates.  From the senior officers that regularly visited the wing to the greenest recruit airman with a problem—Hawk made time for them all.  I scheduled an appointment with him, an all too transparent meeting to review VFC-13’s mishap plan.  That first meeting was not disappointing.

For the next ten years, our professional paths crossed many times.  From 1989 through 1990, it was my great fortune to work for Hawk at Naval Air Forces, Atlantic Fleet headquarters (COMNAVAIRLANT).   It was a surprise to no one that Hawk was quickly recruited to the front office: Chief of Staff of COMNAVAIRLANT under Vice Admiral Jack “Stinger” Ready.  Admiral Ready had been Hawk’s first fleet pilot and a long time friend.  It wasn’t this relationship, however, that moved Hawk to the front office.

I’d worked for many senior naval officers by this time and had never been disappointed with their leadership styles or qualities, but Hawk was different.  He was a cut above.  He exuded all those traits ingrained in the senior officer ranks but had a most spectacular knack for energizing, organizing, and pointing people toward worthy goals.  He was not a disciplinarian.  He did not lead from the rear.  He never scolded or badgered.  People followed him because they wanted to, because they believed in him, because if he told you to take a hill, you knew he’d be there first.

Hawk was a bit of an anomaly.  He was politically attuned but, paradoxically, not politically motivated.  He was deeply committed to the Navy but also outspoken, unwavering, and quick to identify and correct problems regardless of the political fallout or personal sensitivities.  Some of Hawk’s attributes did not always ingratiate him with the Navy hierarchy, but his approach to problem solving was something the Navy desperately needed.

My time at COMNAVAIRLANT was the most formative years of my naval leadership development.  It was the first time I’d been out of the cockpit and my first staff job.  I hated it.  But I learned more about leadership, group psychology, and team building in two years from watching Hawk in action than I had in the previous fifteen.

In 1990 I was ordered to Naval War College followed shortly after by a commanding officer assignment to VFC-12, an adversary squadron at NAS Oceana.  My time in the cockpit was welcomed indeed but only a brief interlude. Before I knew it, I was deep within the bowels of the Pentagon performing payback for my command tour.  In August 1993, I received a call from Hawk.  He informed me that he was retiring.  The news hit me like a wrecking ball.  It was difficult to imagine the Navy or tactical aviation without Hawk.  He’d been such a part of both.

Hawk retired from the Navy on 1 October 1993 after a 30-year career of extraordinary achievements for the Navy and unwavering devotion to the people who served it.

I completed my Pentagon assignment in 1993 and was awarded a major shore command in San Diego not far from where Hawk and his lovely wife, Miss Jenny, had retired. This was indeed fortunate, not only because I was back in San Diego but also because my wife, Katie, and I had an opportunity to catch up with Hawk and Miss Jenny.

I retired in 1998 and finally had time to engage a project that had been on my mind for years.  I wanted to tell a true story about modern naval fighter aviation.  I quickly realized it was impossible to tell this story without recounting the evolution of naval fighter aviation and call attention to some of those who drove the changes.  And, I discovered, it was most difficult to sketch the exhilaration, feeling of achievement, and rollicking fun of carrier aviation without also addressing the terror, anguish, and personal sacrifices of everyday heroes working in one of the world’s most unforgiving and lethal environments.

I was equipped with many of my own experiences to draw from: deployments; ship operations; air combat training; and command responsibilities—but I wanted a different frame of reference.

During my career, following the lessons of the Vietnam War, I watched the renaissance of Navy TACAIR unfold.  I was an observer to the ascension of TOPGUN, fleet introduction of the F-14 Tomcat, initial trials of the FA-18 Hornet, the largest, most expensive air combat evaluation in history, ACEVAL/AIMVAL, and the overhaul in fleet tactics training.  Hawk, conversely, was, in varying degrees, concentric to all these achievements.

I wanted to explain the significance of these milestones in the Navy fighter mission, but I was compelled to report them through the experiences of someone who had been involved with them.  I realized I needed to tell Hawk’s story.

When I first broached the subject, Hawk responded in typical humble fashion, “Write about somebody famous.  Write about a hero. Write about somebody with lots of combat time.”  True, Hawk was not famous and had very little combat time, but he was a hero.  He was one of those who worked without fanfare—too absorbed in the mission, too busy trying to make good things happen to draw any attention to himself.

I was relentless.  After four years of pestering Hawk, in a weak moment, he conceded.  We began work on “Roger Ball!” 1 July 2002.

Research, initially, was slow.  I was convinced to tell the story the way it needed to be told, to enrich authenticity and accuracy, I had to crawl into Hawk’s brain and explore the inner workings of his mind, to understand what he did, how and why he did it, and describe his drives and concerns.   I wanted to understand and convey his inner-most thought processes in aerial engagements, life-death crises, times of great internal conflict, and during those lonely times of uncertainty when one has to choose between convenience and conviction—between right and wrong.

Much to my happy surprise, Hawk was open and proactive.  He willingly transported me back to the scene of events, to render historical, technical, and personal detail to the many stories captured in this work.  I spent thousands of hours researching history, tactics, aircraft, weapons systems, fighter performance characteristics, and hundreds more interviewing Hawk and many of those who influenced the dramatic changes in the Navy’s fighter community.  Not surprisingly, gathering details of events, conversations, specific nuances, and personal recollections after the passage of three decades was difficult.  I must confess, I had help in fusing the parts of this story together.

Finally, but most importantly, I also wish to thank the person who, more than any, gave me criticism, enthusiasm, and a steady wind over the deck: Colonel John Grider Miller, USMC, (Retired).

John Monroe “Hawk” Smith will never be a household name, but I hope this work paints a portrait of a U.S. military officer, like thousands serving America today, who was willing to work and struggle, often at great personal risk, for those principals, people, and institutions he held dear.

If “Roger Ball!” is enlightening, these men and women helped make it that way.

If it is poignant, I have successfully told Hawk’s story.