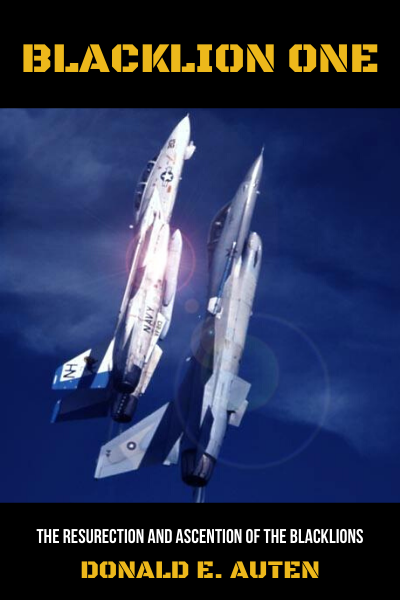 The triumphs and losses are well described with almost cinematic levels of depiction in the author’s evocative words, and overall this makes Black Lion One a truly immersive read from cover to cover. A recommended and accomplished work of biography.

In Black Lion One, author Donald Auten, masterfully incorporates the challenges of the era following the Vietnam War with the fighter community’s  re-evaluation and discovery of the lessons coming out of Vietnam.   From this chaos of war, a new apogee in the fighter war arts was born through deities of the air warfare tribe—warriors like Mugs McKeown, Randy “Duke” Cunningham, Dave “Frosty” Frost, Bad Fred Lewis, and many more.

Black Lion One captures the true spirit of a Navy Fighter pilot’s career, especially the two defining command tours as Commanding Officer of TOPGUN and the Black Lions.  Hawk’s story is one of persistence in the face of adversity; success and achievement when confronted with stagnation; and extraordinary leadership when embroiled in havoc.  As Auten weaves the history of world events and incorporates the many real-world challenges within the fighter squadrons and community, the key and most potent ingredient of true leadership highlighted is that of taking care of your people.  In fact, this book should be required reading by every potential commanding officer, regardless of community.  The other vital element captured by Auten is the importance of support from senior leadership as demonstrated by RADM Gilchrest. Captain John Monroe “Hawk” Smith was in this congregation of savant fighter pilots and tacticians in the midst of the tempest who pushed forth Naval TACAIR forces to its rightful place of superiority.  Hawk’s vision, tenacity, and unsinkable enthusiasm was known and admired throughout the fighter community.  Successful tours at VX-4 as the F-14 Tomcat Project Officer and Commander Air Group FOURTEEN Senior Landing Signal Officer for the first ever F-14 deployment equipped him for assignment as the Executive Officer, then Commanding Officer of the famous Naval Fighter Weapons School—TOPGUN.  Hawk’s tour there, a grueling but highly successful assignment, caught the attention of decision makers in the highest tiers of Navy leadership.  He was rewarded with a second command tour as skipper of VF-213—the Black Lions.

Hawk was a warrior in the realm of great fighter pilots and a visionary leader totally dedicated to resurrecting Naval TACAIR as the finest, most lethal force in the world.

Black Lion One is the conclusion of the odyssey of a great Navy Fight Pilot—Captain John Monroe “Hawk” Smith. The primordial elegance and immense splendor brought Hawk solitude, clarity of purpose, and thankfulness. Cocooned snuggly in his Tomcat, thousands of feet above the worries and stresses of mortal man, he felt alive, free, and energized with a realization that he was doing what he was supposed to be doing. He was in perfect harmony with his destiny. Embraced by the sheer beauty surrounding him he had found complete tranquility.  When he returned to earth, when the landing gear hit the steel deck of the Enterprise, he would be just a man again, but for a little while, a moment frozen in time, he felt immortal.

Early in the morning of June 4th, 1942, the aircrews of Torpedo Squadron EIGHT (VT-8) assembled in their ready room.  Waiting for them was a memo from Lieutenant Commander John C. Waldron, Commanding Officer of (VT-8).  It read, “My greatest hope is that we encounter a favorable tactical situation, but if we don’t, and the worst comes to the worst, I want each of us to do his utmost to destroy our enemies. If there is only one plane left to make a final run-in, I want that man to go in and get a hit. May God be with us all. Good luck, happy landings and give ’em hell.”

It was a sobering message.  All aircrew knew their responsibilities.  They had accepted them.  And all, to a man, were prepared for the consequences.

They received their briefs, donned their flight gear, then, “Pilots, man your planes,” blarred over the 1-MC.  Pilots and crew assigned to that first strike, rushed to the flight deck, strapped in, and cranked up.

They flew with the throttle full forward, straight and level at almost 180 knots, without fighter cover into the roaring guns of the Imperial Japanese Navy.  Fifteen obsolete Douglas TBD Devastators were destroyed, all aircrew, save one, were slain, a squadron was obliterated, and for their gallantry and sacrifices, a battle was won.

Black Lion ONE is dedicated to these brave Americans.

“We Will Strike, Regardless of the Consequences”